Last year, we introduced Skylanders Trap Team for tablets, which was one of the first games to deliver the complete console experience to tablets. Now, we’re continuing to offer new ways to play Skylanders and other games, whether you’re at home or on the go. This fall, we’re bringing Skylanders SuperChargers, Guitar Hero Live, and Geometry Wars 3: Dimensions Evolved to the new Apple TV announced today in San Francisco, as well as iPhone, iPad, and iPod touch devices. 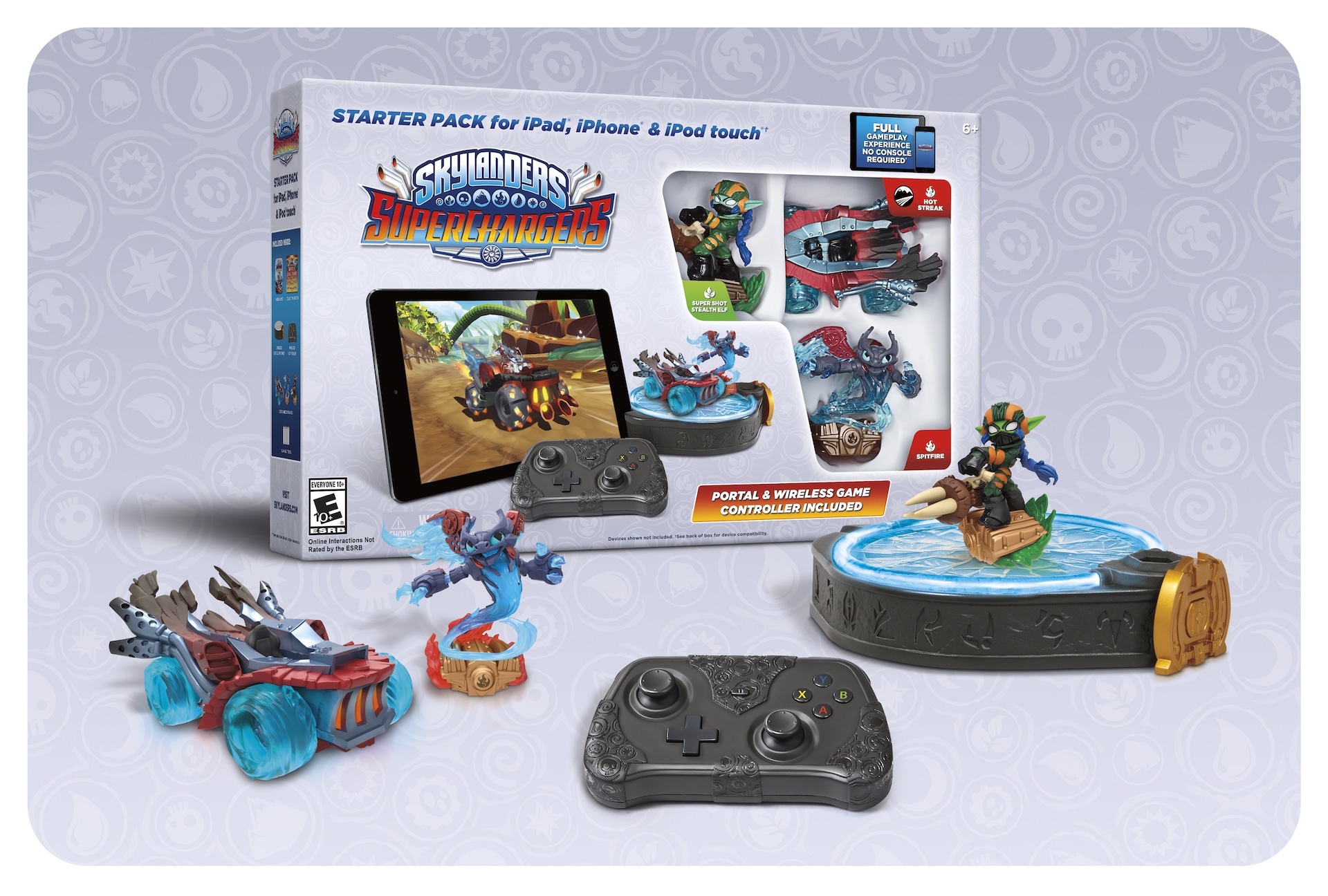 Skylanders SuperChargers brings a new style of gameplay to the Skylanders universe with the introduction of land, sea, and sky vehicles and vehicles-to-life toys. The Skylanders SuperChargers Starter Pack for Apple TV, iPad, iPhone, and iPod touch will include everything fans with those devices need to play, including a Bluetooth-enabled portal, an embedded Bluetooth controller, and even a built-in stand. What’s more, if you have multiple Apple devices, your progress can be seamlessly synced across Apple TV, iPad, iPhone, and iPod touch with cloud save support under the same Game Center account.

And if you already own a Bluetooth portal and controller from the iPad version of Skylanders Trap Team, you can use the same devices for Skylanders SuperChargers. All you need to do is download the game and you are good to go. You can also play Skylanders on your favorite consoles as well, including Xbox One, Xbox 360, PlayStation 4 system, PlayStation 3 system and Nintendo's Wii U system as well as Wii and Nintendo 3DS. 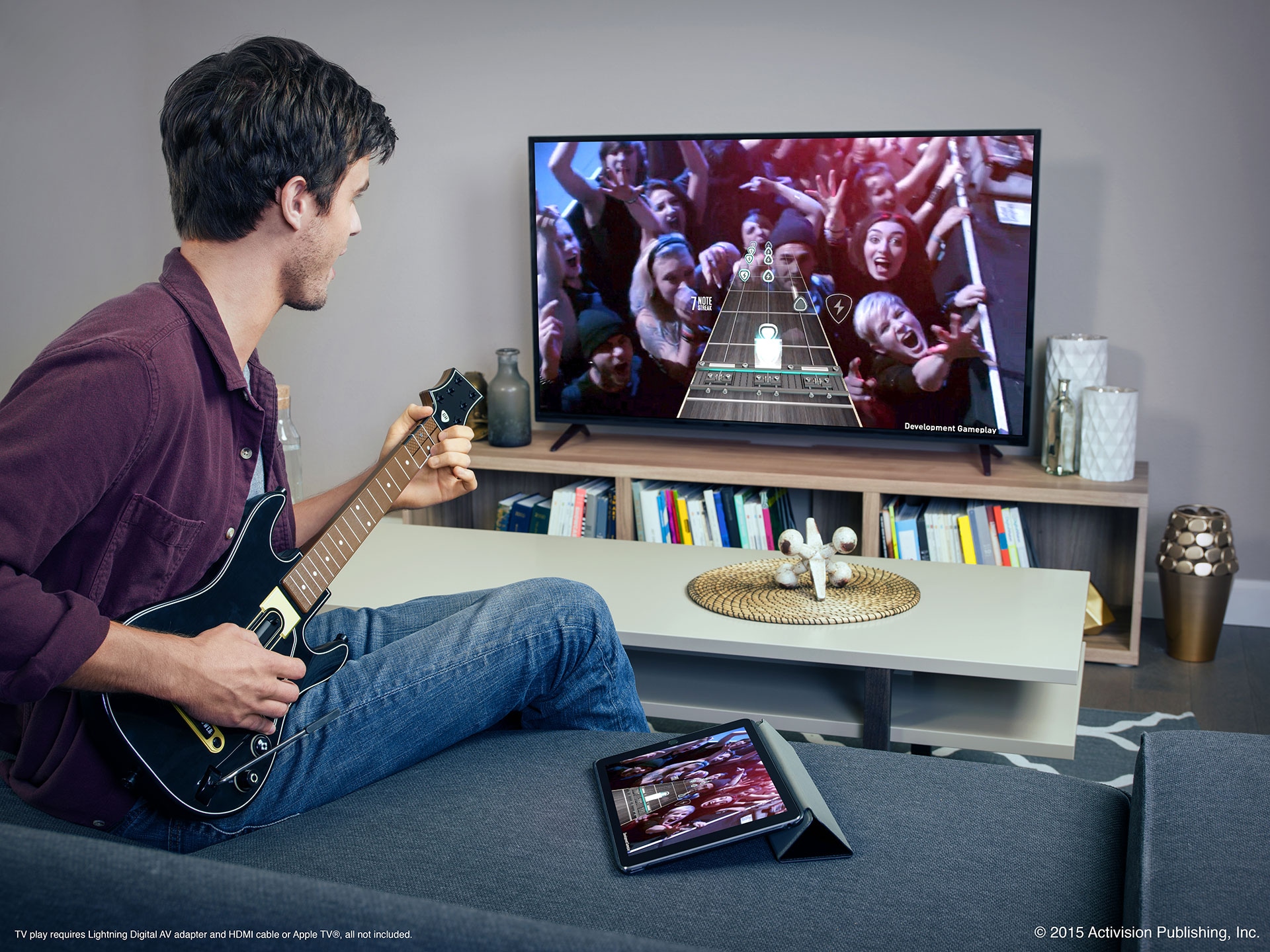 Guitar Hero Live is also coming to a wide array of devices, including consoles, mobile devices and Apple TV. Guitar Hero Live’s GH Live mode brings you closer to the live stage experience with live-action, first-person gameplay with crowds and bands that react dynamically to how you play. There’s also GHTV, the world’s first playable music video network, which lets you play along with a continually updated collection of official music videos spanning a variety of genres. Guitar Hero Live for Apple TV, iPad, iPhone, and iPod touch devices will come with the redesigned six-button guitar controller, which connects through Bluetooth so it be used across all supported Apple devices.

“We jumped at the opportunity to bring back Guitar Hero in a cool new way with Guitar Hero Live and have been energized by the response from fans who have had a chance to play it so far,” said Jamie Jackson, co-studio head and creative director at FreeStyleGames. “We can’t wait for the game to launch next month and think people are going to get a kick out of living their rock star fantasy on consoles, mobile devices and Apple TV this fall. It’s going to be rad!”

Last, but certainly not least, Geometry Wars 3: Dimensions Evolved, which launched for consoles and PCs last October and mobile devices earlier this year, will be available on Apple TV and iPad Pro this fall. The fast-paced arcade-style shooter game that features 3D action and gameplay modes, a dedicated single-player campaign and revamped online cooperative mode is a lot of fun to play with the new remote for Apple TV and the new Apple Pencil on iPad Pro. We think a lot of people will discover the game and play it in these new and exciting ways.

For more information, check out Apple.com and stay tuned to the Activision Games Blog. You can also get all the latest by following @Activision on Twitter.